Colombia has taken a crucial step forward regarding the protection of its marine and coastal ecosystems. Two new protected areas (IUCN Category VI) were declared in the Pacific region and one of the most biodiverse marine areas on the planet was expanded: the Malpelo Flora & Fauna Sanctuary (SFF).

WWF applauds the actions that environmental authorities, civil society and governments around the world carry out to protect and sustainably manage marine and coastal ecosystems. Thanks to the commitments made in the Convention on Biological Diversity (and specifically those related to the achievement of the Aichi targets, to conserve 10% of the world´s marine and coastal areas), Colombia´s achievements make a significant contribution for world´s oceans and the survival of all.

Human well-being depends on the health of our environment and natural ecosystems. Maintaining our oceans and coasts is critical to guarantee the benefits they provide for us: 60% of the world´s population  depends on a fish based diet, which forces us to think of the oceans and coasts as true sources of life, rather than places just for recreation and diversion.

On September 14th, the Malpelo Flora & Fauna Sanctuary (SFF) grew from 950,000 to 2,667,000 hectares. This SFF safeguards a significant portion of the marine diversity present in its seamounts (undersea mountain ranges), under-represented ecosystems in the Colombian protected areas system.  This is a strategic conservation zone located in the Tropical Eastern Pacific –one of the marine zones with the greatest biodiversity on the planet— and, since 2006, is a designated UNESCO World Heritage Site.

At the same time, the President signed an order to establish Yuruparí-Malpelo National Integrated Management District (DNMI), with an extension of 2,691,000 hectares, which was delimited for the conservation and development of sustainable and responsible fishing activities. This DNMI conservation framework constitutes a joint management model for national authorities and the Colombian industrial fisheries sector to benefit from sustainable fishing in the region, and was the result of a collaborative effort between the National Authority for Aquaculture & Fisheries (AUNAP), the navy, and other actors. 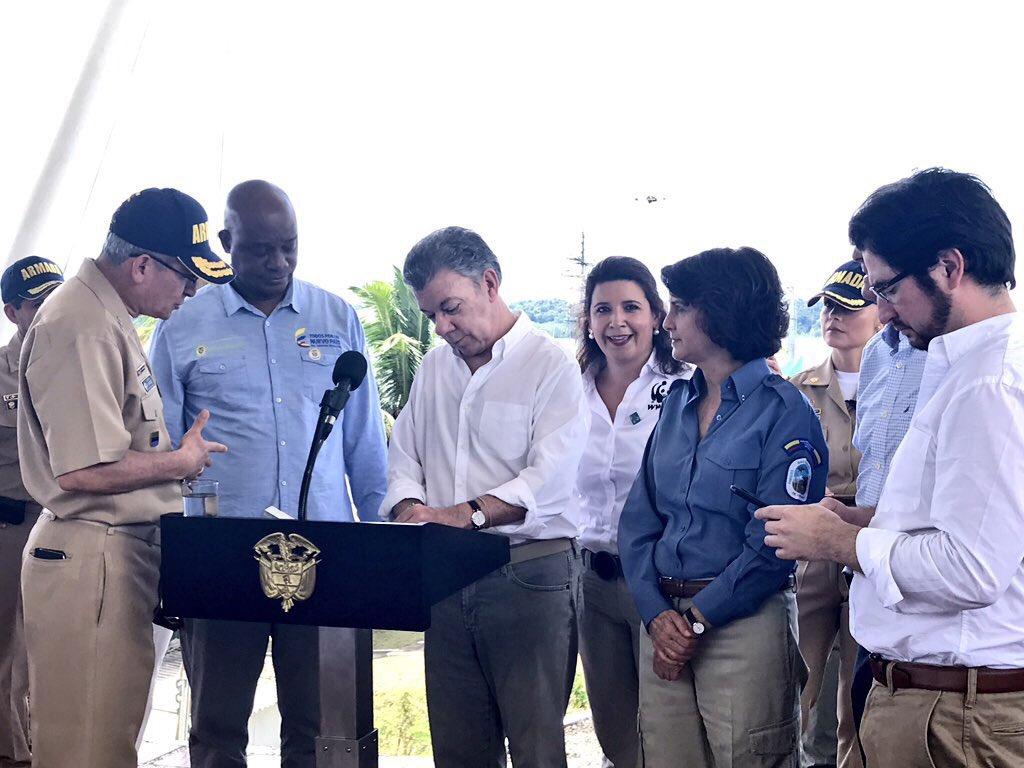 Colombian President Juan Manuel Santos signs the declaration of the Yuruparí Integrated Management Disctrict, and the expansion of the Malpelo Flora & Fauna Sanctuary


“We must defend our biodiversity. It is the most important inheritance we leave for future generations,” declared President Santos during the event, and continued: “As Pope Francis and our indigenous communities –our elder brothers–have said: nature is not an inheritance that we receive from our parents, but rather a loan from our children.”

“The addition of these new hectares leads to the fulfilment of two objectives: first, the goal of the National Development Plan in terms of conservation areas and SINAP expansion and, second, significant progress in meeting our international commitments on matters of biodiversity protection under the Convention on Biological Diversity (CBD) and, specifically, to Aichi Target 11, which proposes the conservation of 10% of marine and coastal areas through establishment of protected areas.  Today, Colombia has surpassed this goal,” affirmed Colombian President Juan Manual Santos. 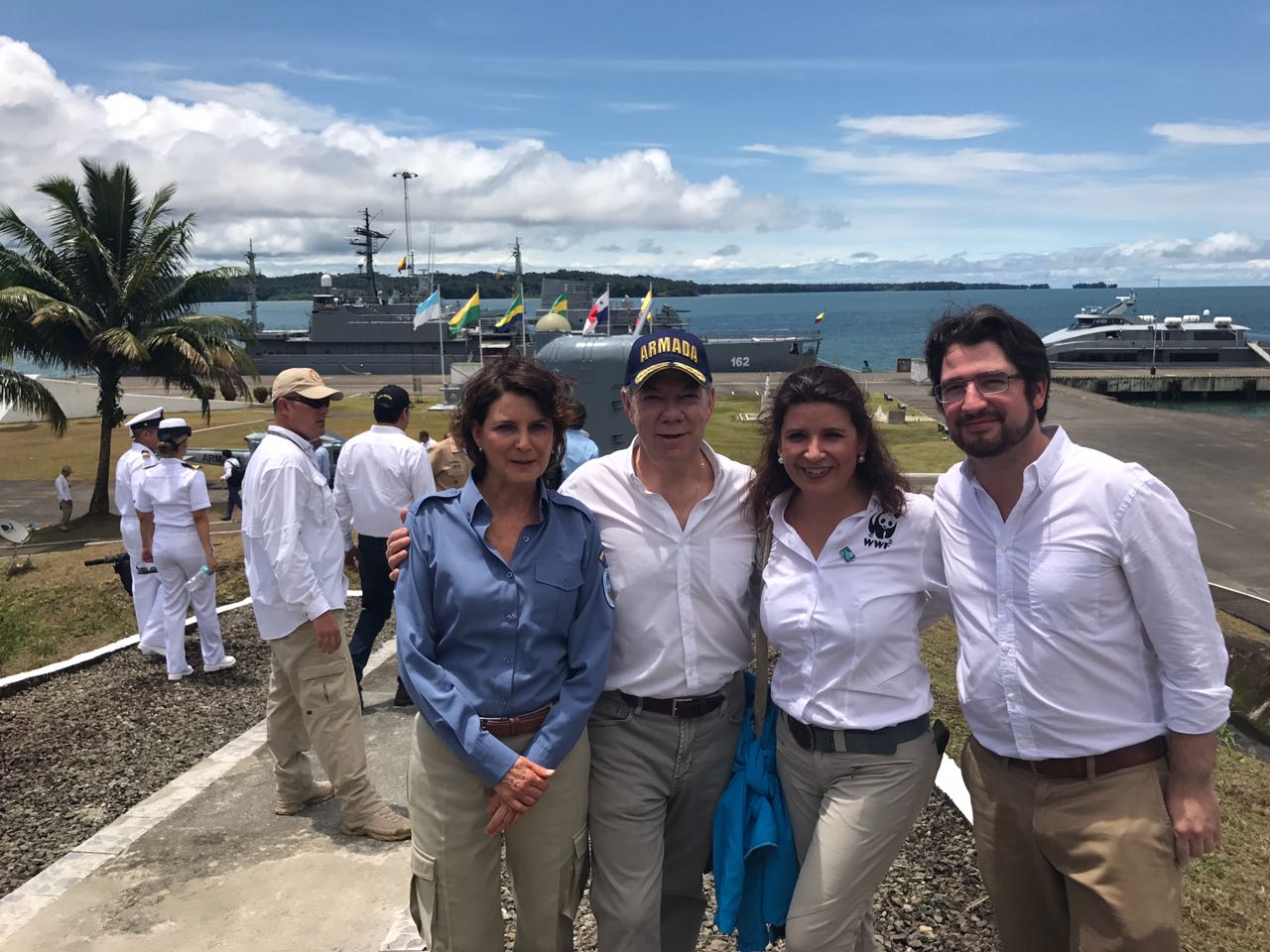 
Mangroves Will Also Be Protected

In addition to the announcement on September 14, Codechocó, the regional environmental authority of the Chocó Department declared  Bajo Baudó Encanto de Manglares Regional Integrated Management District.  This area with an extension of 311,565 hectares protects beaches, mangroves, corals, sandbars, and bluffs, among other key ecosystems for the country.  This location has rich biological diversity including fish, crustaceans, molluscs, mammals, reptiles, amphibians, and birds. Furthermore, it is part of the migration route of humpback whales (Megaptera novaeangliae) and is also the nesting site for marine turtles such as hawksbill (Eretmochelys imbricata), green (Chelonia mydas), and olive ridley (Lepidochelys olivacea).

Mary Lou Higgins, WWF Colombia’s Director, explained that the significance of the zone lies in the interconnectedness of the ecosystems protected where numerous species converge, some of them endangered, such as hammerhead shark species (Sphyrna lewini and Sphyrna corona).  She adds, “We hope that this area will be set an example for mangrove conservation, taking into account that Bajo Baudó is the municipality with the greatest coverage of this type of vegetation in Chocó department.”

The declaration of the Yuruparí-Malpelo and Bajo Baudó Integrated Management Districts, and the expansion of the Malpelo Flora & Fauna Sanctuary, contribute an additional nearly 5 million hectares of new marine and coastal protected areas and helps to consolidate the National Protected Areas System (SINAP) which, going forward, will have more than 28,400,000 hectares in which the different marine, coastal, and continental ecosystems that make up Colombia’s natural heritage are represented and protected.